On Friday 23 September the Canberra Group performed a tea demonstration at the Embassy of Japan.  The tea demonstration was part of a reception called “Spring Festival.  The guests were greeted by the Spring cherry blossoms which are now at their best in garden of the Ambassador’s residents.

There were three sittings of 10 guests at each demonstration using misono tana.  Our ceremonial scroll features a tanka from ‘Manyoshu’ which cerebrates the arrival of spring.  Accordingly, the sweets prepared by our group members to serve on the day were called ‘haru no irodori’ (春の彩).

There were other activities inside and outside of the residents, with many people showing interest in the tea demonstration.  Those people who could not find a place to sit on the 10 chairs, stood behind the chairs and watched with great interest. When each demonstration finished the guests and the other audience members spontaneously applauded. Among the guests was Ambassador Yamagami and his wife.

Each teish, hanto, the MCs and all the mizuya helpers did a wonderful job so that everything went very well.

On September 24th, we presented the Japanese Tea Ceremony in the Japanese Garden in Cowra for Sakura Matsuri. Luckily, the weather was beautiful as it had been raining the night before and drizzling in the morning. The event was extremely successful, we had the highest numbers of visitors setting a new record, 219 guests came to our chado demonstration, including Mr. & Mrs. Tokuda, new Consul-General of Japan and Mr. & Mrs. Shono, Director of  the Japan Foundation. We also donated the funds on the day. Our legendary Mrs. Matsunaga who made the okashi saved us from running out of sweets! Canberra groups came to support this events a well.

On 11 September, we conducted a chado workshop in Leura for the Japanaroo 2022 event. On a beautiful late winter day, members demonstrated chado Tsurigama style. All guests then tried whisking matcha. Shingo Yamagami, the Japanese Ambassador was present, his first visit to the Blue Mountains. Mark Greenhill, Mayor of the Blue Mountains also joined and met with the Ambassador. Thirty-six guests enjoyed the beautiful atmosphere of the mountains.

The first Cowra Koyo Matsuri festival was last year. It is mainly for children, because 5 May is Children’s Day (子供の日, kodomo no hi) in Japan.

On this day, families flykoinobori, carp-shaped windsocks (carp because of the Chinese legend that a carp that swims upstream becomes a dragon and flies to Heaven, and the resem blance of the waving windsock to swimming fish): a black carp for the father, a red or pink one for the mother, and a blue one (or perhaps green and orange) for each child.

Cowra Japanese Gardens had several events for this festival. First, they had a Service of Respect for those who died in the Break Out from the Cowra Prisoner-of-war camp. Next, Dr. Geoff Gallop AC, former Premier of Western Australia, gave an oration about “Japanese gardens as a site for business and diplomacy in Australia-Japan relations”. His oratorical skills were impressive.

After then guests moved to our setting chashitsu in the Education Centre for a tea ceremony. Robert Davies gave the explanation while Tomomi Nakaya performed. Ryoko Freeman served the VIPs. Yen-Yu Lin, Irina Subkhanberdina and Takeshi Shibata served other guests from the mizuya (kitchen). We served over thirty guests. The first day concluded with the Mayor’s reception.

The next day, 5th May, Cowra Japanese Garden invited 500 students from the region. We performed chado four times in the morning to 147 students and teachers. Mr Matsunaga kindly donated kompeito. Mrs. Matsunga made small cookies and sweet boxes by origami. Children received Japanese sweets in a pretty box. They were delighted with the presents. Five helpers and Peter Armstrong, Kyoko Mckay from Canberra joined for serving tea. Members took turns in the three roles, temae, explanation, and mizuya.

We showed chado demonstration first and after then students tried whisking matcha. We divided the students into two groups, whisking groups and having matcha groups and then swap. After explanation, students tried to whisk. They struggled. Members advised how to whisk properly. Soon, some students got the trick and were whisking nicely. Thirty-nine students and two teachers attended.

The tea demonstration was part of a large reception with the theme “Sharing your experience of Japan”, in Japanese 日本の魅力発信. There were two sittings for the demonstration using misono tana provided by the Embassy. Many other implements were provided by the Embassy.
The calligraphy on the kakejiku read “seiza ichimi no tomo” (清坐一味友）meaning when gathered in a sacred space (a tea room), friends become one by drinking tea made with the hot water from the same kettle. The sweets served on the day were otoshibumi (落とし文).
The main guests at the first sitting were Ambassador Yamagami and his wife. The main guests at the second sitting were the Canadian High Commissioner Glauser and his wife.
Many members assisted with serving sweets and tea preparation under the direction of Kyoko sensei. 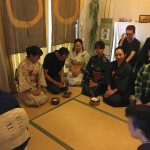 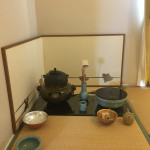 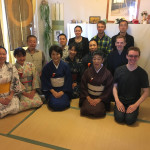