Tankokai Sydney Association had its very first Members’ Chakai on Saturday, May 3, 2014 at Ryokan Gojyuan.

Gojyuan is located on the vibrant main street of Balmain, an inner west suburb of Sydney. Once you step through the front door, you feel as if you are in Japan. Beyond the nice sized lobby area, there is a walkway overlooking a Japanese garden with a carp pond leads to two eight-mat guest rooms and a bathhouse. 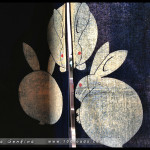 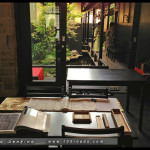 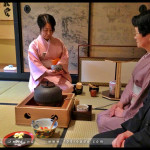 Machiai was set in the lobby and Kaiki (one was written in Japanese on Makigami and the other was in English) were displayed with box lids Kakitsuke were written and Tomozutsu of Chashaku.

Thirty bookings were received and twenty-eight members attended at one of three Usucha sessions each. The Mizuya team consisted of Yukiko Cooksley, Yuiko Maeno, Kazumi Kobayashi and Itoko Inoue worked efficiently for the preparation prior and serving on the day.

The theme was “Autumn Leaves”. The one line work” Kooyoo shuufuu ni mau.” written by Rev. Katsudoo of Ryuugen-in stated the theme clearly with the red Raku bowl by Chooraku Ogawa, Tatsuta-gawa Iroe bowl by Koorin Miyagawa and the large Keyaki wood Natsume with Makie of maple leaves inside of the lid by Shooun. The black Raku bowl by Koonyuu “Matsukaze” named by Tantansai was a special treat for the guests. Also the Chashaku “Otozure” made and named by Rev. Kaidoo was welcoming the guests. Chikuju-dana, Akae Mizusashi , Furosaki and Okiro with TsuboTsubo open works converted a guest room into a Chashitsu very well.

The sweets were well-suited to the theme of the Chakai. The main sweet was Nerikiri named “Arashiyama”, three maple leaves of gradation of green, yellow, orange and red sitting on top of each other on the white egg-shaped Nerikiri. There were two kinds of dry sweets: ginkgo leaf shaped Oshimono and toffee coated pecan nuts. All sweets were made by the Mizuya team.

Forty-five minute session was just long enough for 9-10 guests to have a bowl of Usucha each and to have a good close look of the utensils. Mizuya team managed well to prepare for the next sessions in fifteen minute intervals.

For most members it was the first visit to Gojyuan, and they were very impressed by its authentic Japanese ambience.

The early shower stopped in time for the Chakai, and many members turned up in beautiful Kimono, which enhanced the mood of Chakai even more.

Thanks to the good choice of venue and the great team work of Mizuya, our first Members’ Chakai was a memorable occasion.