On Sunday, 28 May we had a members’ chakai «Banshu no Chakai» at Ryoan, the residence of Ryoko Freeman in Leura, organised by Ryoko’s group (20 members).

There is a teahouse in the backyard of the house. Before entering gate, there is a machiai (waiting place). Anthony Brien taught how to put enza (seating cushion) to young members. In the gravel lake area we put Suehiro-dana to perform usucha temae. Anthony and Megumi Moxey led Usucha-seki with four members. 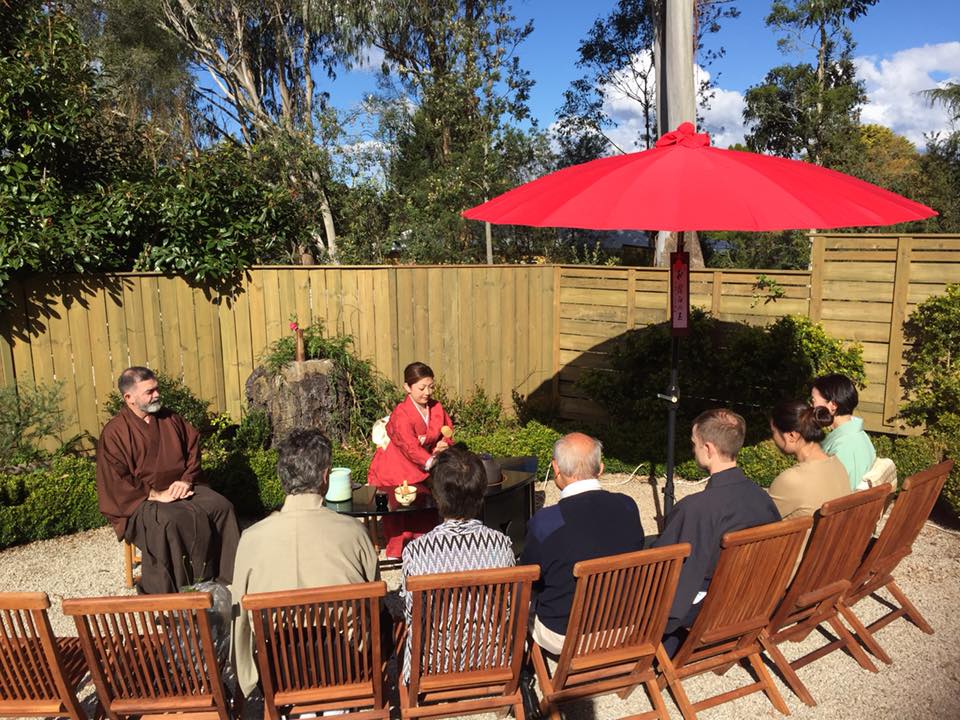 In Ryoan (teahouse), we put ro in eight-tatami room with alcove. On hearing the gong, guests entered through the nijiriguchi and enjoyed tea in the proper manner. Emiko Shirato and Mikako De Caires led Koica-seki with six members.

Ttenshin-seki was in the house. Takeshi Shibata cooked beautiful tenshin, helping by Yoshi Matsumoto and Naomi Sullivan. The tenshin was beautiful and gorgeous. Everybody enjoyed the Hana Restaurant chef’s cooking.

Beyond the teahouse there is a torii-gate and a shrine (Seizan Jinja) on top of the garden. All guests prayed to Japanese kamisama (god).

The day was a beautiful late autumn day, with most leaves already fallen, but 24 guests enjoyed and were well-satisfied very much our members’ chakai. 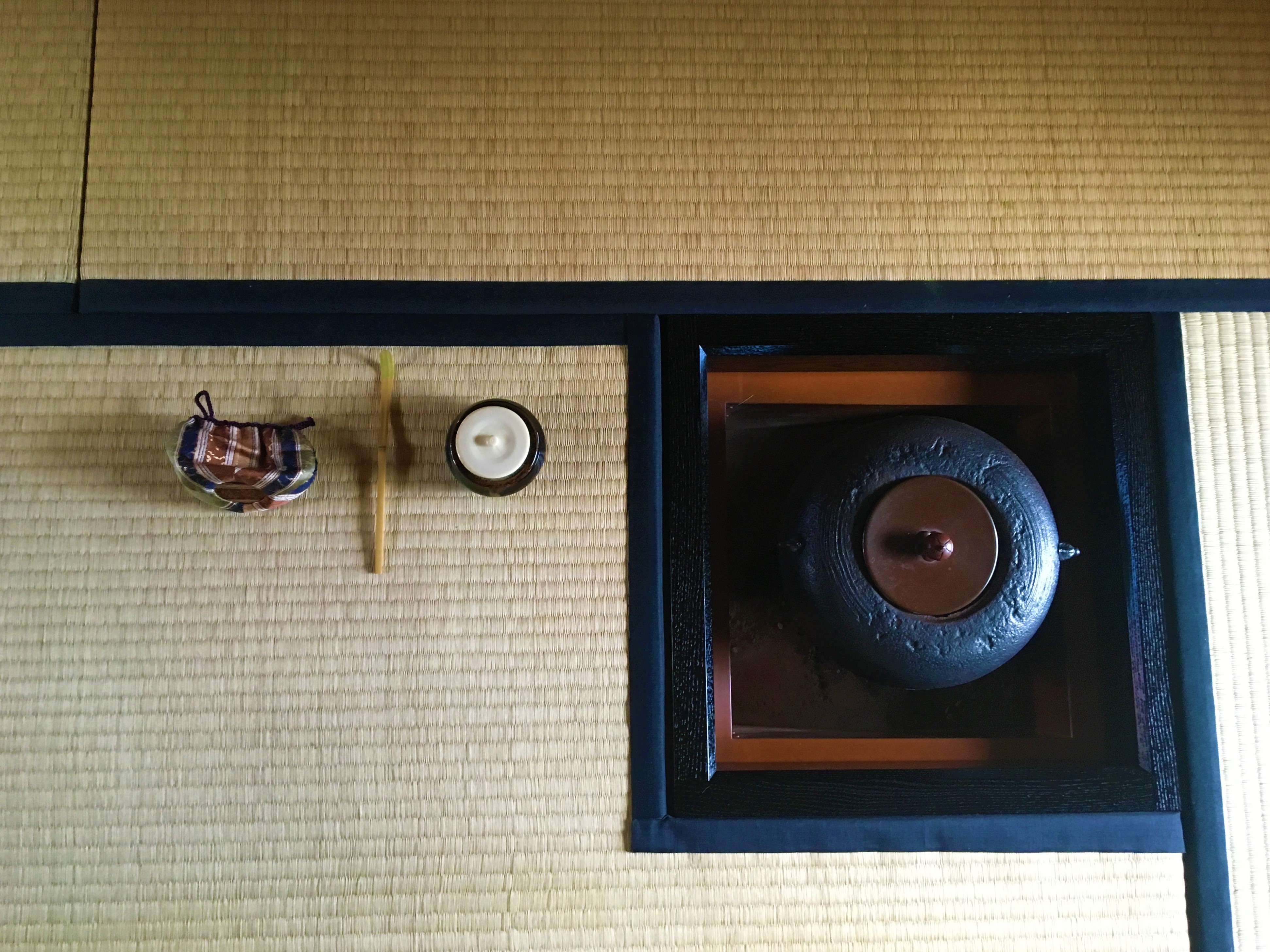 The member’s Chakai was held in Ryoan (Ryoko’s tea house in Leura) on 28 th May on a beautiful late-autumn day.

The theme in Okoicha seki was late autumn. In an alcove we displayed calligraphy “Shugiku Kashoku Ari”, which means autumn chrysanthemum, beautiful coloured. We used tsubotsubo gingko leaf pattern futaoki, Tantansai favourite. Japanese sweet was made by one of our members, Sakae Ito, called “Yamazato”-mountain village, which shaped mountains with autumn colours. The sweet was one of our special treats to our guests.

We used chashaku “tomogaki” meaning friend. We enjoyed ourselves to serving tea and built up friendship with our guests. 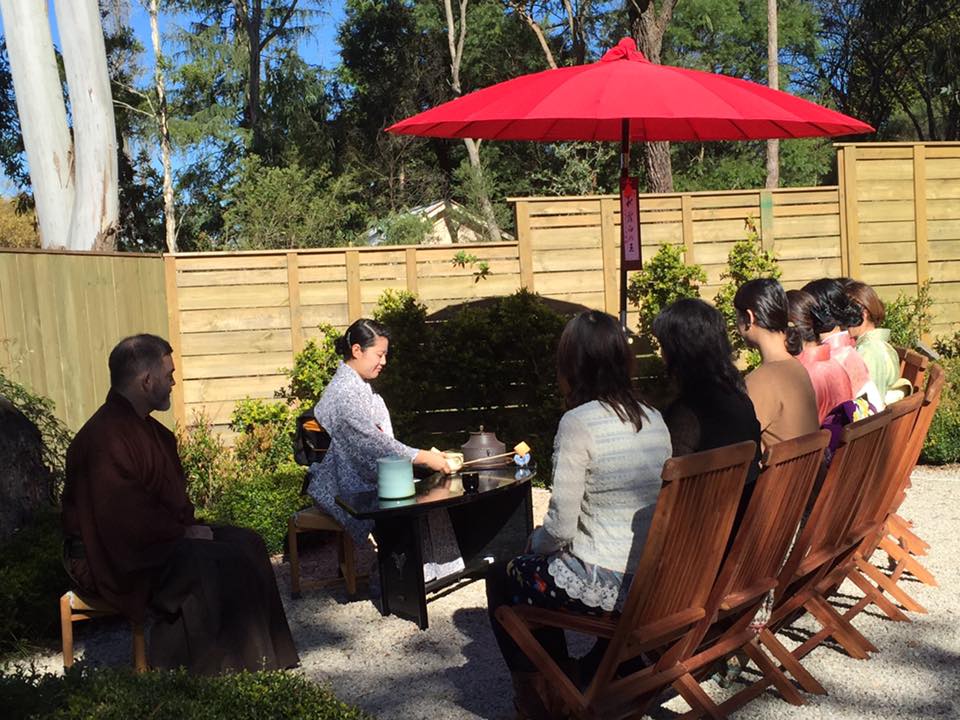 Usucha seki was held in the Ryoan Garden in nice weather. The city and Blue Mountain members helped each other, and the process went smoothly.

Usucha seki was run by open time arrangement, and we did temae whenever sufficient numbers gathered. In total we did temae six times. (Tamaki, Anthony, Eiko x 2 times, Megumi & Misako in order)

The guests had nice comments for the selected utensil’s combination that matched the season.
(In Australia, Mother's day flower is Chrysanthemum, and the gathering was held two weeks from Mother’s day)
Mizusashi and Kensui were made by local Australian Artist Paul Davis. Kensui had a unique colour like yuteki style.