Once a month, about 200 members of WIC Canberra gather for a “Contact Morning” at the Helenic Club in Woden.

Each month at the Contact Morning, one of two alternate main programs are held. One program is to invite a speaker for a talk and the other program is a so called ‘Cultural Morning’, introducing a different country’s culture. 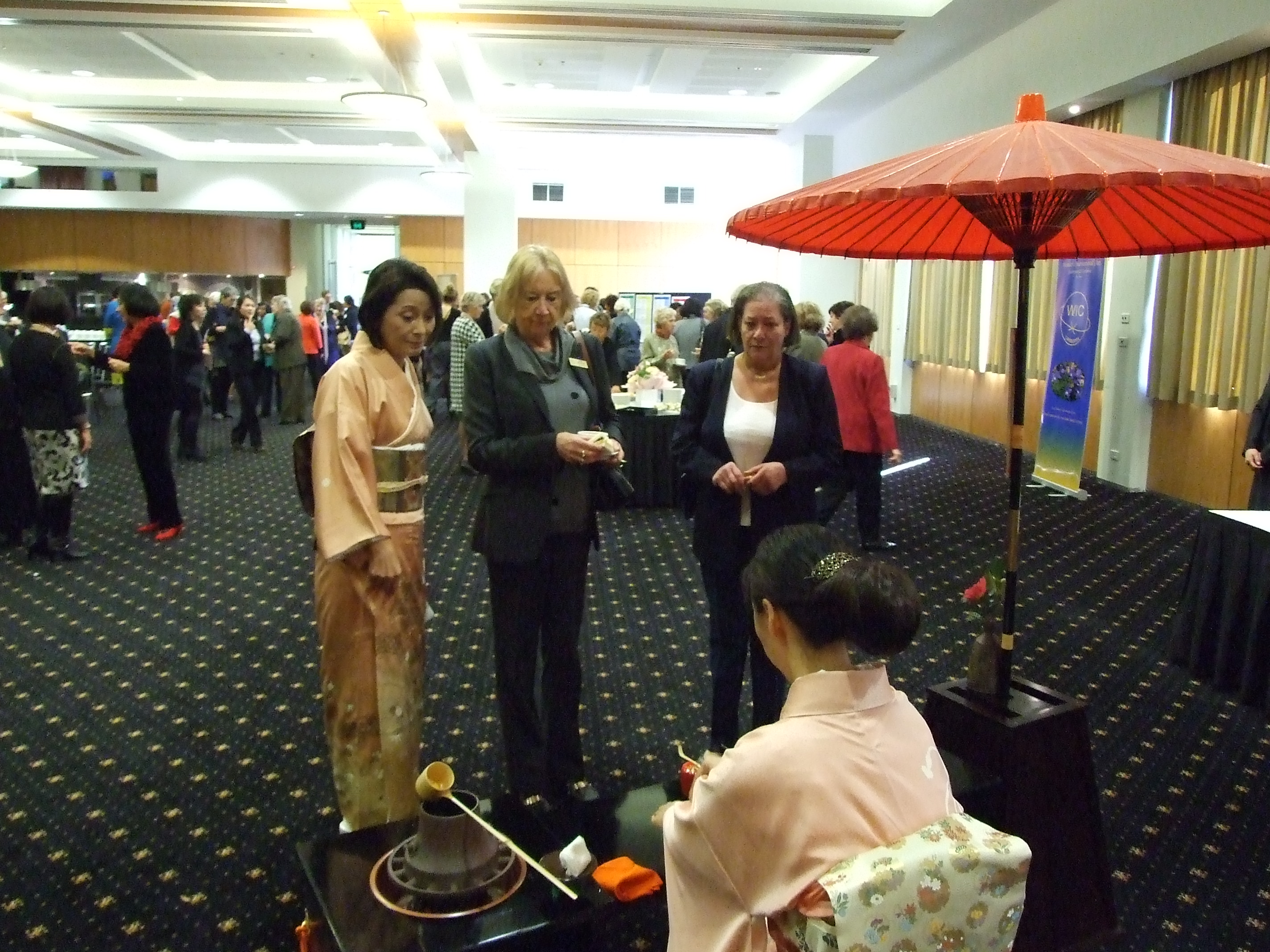 According to an itinerary carefully planned by the Japanese circle members to fit within the WIC’s Contact Morning’s first program ‘tea time’, which went from at 10 am until 10:30 am, Kotoyo Otsuki, a member of the Canberra tea group as well as a WIC Japanese circle member, demonstrated Misono tana temae on the venue floor.

So that interested WIC members could taste maccha, a small quantity of usucha was served in 60 yunomi cups but by 10:20 am all the yunomi cups were used as they couldn’t be cleaned and reused due to lack of access to water.

After ‘tea time’, the WIC Committee introduced new members and reported on outcome activities. Then Mrs Akimoto gave a 10 minute PowerPoint presentation explaining briefly about the history of tea and the Japanese tea ceremony.

Following Mrs Akimoto announcement that a tea ceremony demonstration would take place on the stage, the main guest (Takako Mizogami) and the second guest (Megumi Eddison) began with ‘sekiiri’. The teishu (Sachiko Inuzuka), gracefully performed hira temae and both guests smoothly showed how to appreciate tea and the utensils. During temae, Keiko Foster gave an excellent explanation (with a touch of humour) of what the teishu and the guests were doing.

During the tea demonstration, the Mizuya team (Letha Chang, Kotoyo Otuski and Kyoko McKay) efficiently worked to prepare sweets and usucha. The sweets were specially ordered from a Japanese sweet shop to match the Australian season and the tea was kindly contributed by the Sydney Association. Other Japanese circle members (the diplomat wives), in teams of two, served sweets and usucha to the front row guests. They had practiced ‘Hakobi’ seriously before the engagement.

After the demonstration, Mrs Akimoto received a special letter from the WIC President saying that the event was very successful, and received many emails from other members commenting on how it was a beautiful event.