Toda Gyotei-sensei from Kyoto gave a special seminar at the Japan Foundation. Kyoto headquarters sent matcha and beautiful Japanese sweets, “kooriume” and “Funoyaki” for the seminar. And also Toda Gotei-senei brought a tin of matcha and sweets as souvenirs. 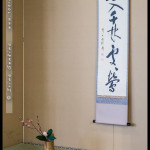 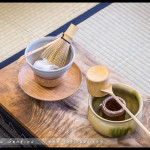 Even though the seminar was held on weekdays and during the day, we had 25 members for the first day and 35 members for the second. One attendee came from New Zealand, three from Canberra, and five from Newcastle.

In the large room with the beautiful central park view, we set up okidoko and eight tatami-mats so as to looks like a real chashitsu. We arranged chairs around the tatami mats for the audiences. Daisosho, who always support us very much, sent okodoko. This is the first occasion of use.

On the first day, we had Okuden (Highte temai). All temae members performed smoothly. Mr. Toda explained the aim, general gist, and theory of the temae. He also explained suitable utensils.

On the second day, we began with fukusa-sabaki. Mr. Toda taught us by breaking down fukusa sabaki into separate movements. This helps us to understand how to adjust our own movements. When Mr. Toda saw okiro with the box for the place of the ash tray, he was surprised and took a photo of it. Itoko Inoue made a lot of effort to do sumi-temae smoothly.

The temae members were nervous and made some mistakes, but the programs went very well. Mr. Toda explained both the theory and details. We had many questions and Mr. Toda answered appropriately.

After finishing the program, members cleared up all utensils and the setting in a timely manner without mistakes.

In the evening we had dinner with Toda Gyotei-sensei at a Chinese restaurant, Zilver. Thirty members attended, including Tim who had helped with delivery. We enjoyed beautiful Chinese food with drinks and lots of chatting.

We have to say thank you to the Japan Foundation for allowing us to use their wonderful venue. The director Mr. Endo, deputy director Mr. Nakajima, Ms. Koshi and Mrs. Kawasaki helped the using utensils and venue.

We also thank the members who helped with the preparation of the seminar. Without such help, this events like this won’t happen.